Yanno. I learned something. I must be careful sending Marc suggestions for Friday Heroes because he just may ask me to write about it. He’s one sneaky fella – but hey – because he doesn’t know what’s in his future, what the hell – so be it – here’s another edition of Friday Heroes.

First of all, you’ve got to sit back and watch this one (about a minute) because you will be smiling. Plus, it is proof that people in the UK also have too much time available.

Believe it or not, I found a story about a politician who doesn’t lie or intentionally misleading anyone. Click here to get the full story.

Imma keeping this post to a few stories because the video versions of the stories are a little longer – but they are worth your time.

This weekend is a 3-day holiday weekend in the USA – Memorial Day – the holiday commemorating soldiers who died while serving. I know other countries do something similar. For those needing a salute to fallen military fallen heroes, click here for a rousing rendition of one of my favorite military salutes.

Stephen Wall is an opera singer in Seattle. For those who solely get their news from Presidential Briefings – BREAKING NEWS – this virus thing affects opera because the people involved in the productions plus the audience is more than 10. For not being a plumber, the man has some serious pipes – and he puts them to good use for humanity during these crazy times. This report is worth 7 minutes of your time. Here’s a written story about Mr. Wall.

My peeps know I have a soft spot for genuine goodness – and this story was my top pick of the week. During the housing bubble recession 10+ years ago, 60 Minutes did a story about a man and his two kids that live in a van. I’m not a regular watcher of that show, but I saw and remembered the original story. Dad died and the 2 kids bounced around foster families – but damn – these two kids are making it. She graduated from college and on the Dean’s List – and she’s giving back! Autumn Hope Johnson – you are my Hero of the week. A special shout out to the President of Stetson University who got the ball rolling.

PS: Viewers: Don’t let the speedway beginning confuse you – but it is a cool extra. For those who want to read the story about Autumn, click here.

BREAKING NEWS: Yes kids. . . it’s me, Sundance (Marco). Interrupting this Frank approach to Heroes Friday in order to tuck in a couple stories that were gifted me by fellow bloggers.

First up is Renaissance Man Mark Paxson‘s soulful get. It involves the band Colt Clark and the Quarantines– comprised of a father and his three kids. Every morning, they go into their domestic “recording studio” and record a different song, which they later post to a social media site. As Mark noted in his email, “They aren’t saving the world, they’re just offering up wonderful, clean fun for people to enjoy during these strange, strange times,”

Thing is, when you teach your kids to face the worst of times with a constructive, positive approach, it changes the world. For the better.

And then there’s the lovely Dale who chimed in with a beauty of her own.

When a priest makes it into a meme, the results are usually regrettable . . . until now. Father Tim Pelc of Detroit Michigan figured out an ingenious way to bring Holy Week service to his flock. Pelc took a page from our drive-thru world when he decided to bless his parishioners as they drove up in their cars by using . . . a water gun. The images have become a global sensation, with hits coming from every corner of the world, including the Vatican. The Good Father says he’s happy to bring some much-needed fun to these trying times, and if he can get the job done in the process? All the better.

The man upstairs would be proud. 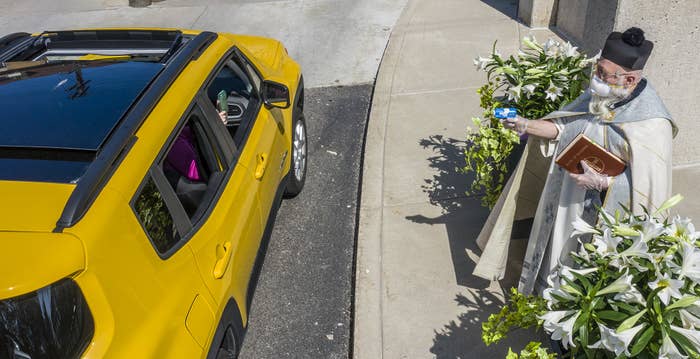 Thank you, Sundance. It’s been a pleasure working in your sarcasm-free space.

The pandemic has not only increased awareness of the goodness around us, but it has also increased opportunities for goodness. I end this post by saluting the countless many who have done the little things – like making masks to give away to those wanting one – checking on neighbors to see if they are OK or need something – contacting someone out of the blue to say hi and to check if all is well – going to the grocery for someone who isn’t as mobile – and the list can go on. A tip of the cap to those performing the little things that go a long way. May their light continue to shine and spread to others while delivering a sense of hope.

Keep smiling, have a good week, and thanks for reading. In the words of Garrison Keillor, Be well, do good work, and keep in touch.

77 thoughts on “Heroes: A Frank Reprise”